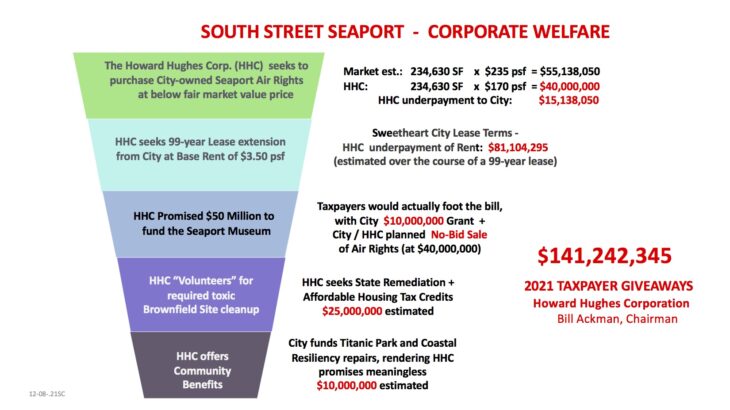 Corporate Welfare – alive and well in NYC’s Historic South Street Seaport ? In a deceptively worded promise of a $50 million contribution to save the South Street Seaport Museum – an amount that was never going to come out of the Howard Hughes Corp.(HHC)’s corporate pockets, and in a craftily worded offer of including affordable housing units – touted as bringing the first in Lower Manhattan under the City’s Mandatory Inclusionary Housing (MIH) program – which was never going to be governed and controlled though that City program, but as all learned, HHC was going to “abide” by its terms, HHC weaved its public relations message of how allowing it to build an out-of-scale tower in the Seaport Historic District was the only way for the City to reap so many benefits. Our term-limited local elected officials – Manh. Borough President Brewer, and City Council Member Chin – easily bought in, as the developer proceeded to make city agency representatives ( from the Landmarks Preservation Commission, the Office of the Deputy Mayor, the City Planning Commission, the NYC Economic Development Corp.) – all feel part of a team that would come to see HHC’s proposed tower as acceptable in the special low-scale historic Seaport.