The Howard Hughes Corp. (HHC) held 3 stakeholder workshops between Sept 2019 and March 2020 where it presented its privately-owned 250 Water St site as an opportunity for all sorts of community benefits, if only the community could be persuaded to trade off long-standing historic district protections so that HHC could build a tower within the Seaport. But spanning the same period that HHC was promoting its public plan, it was presenting an internal budget document to its NY Region – Oct 2019 – which reveals a different plan to sell 250 Water – as soon as 2022. As a key slide shows, if HHC is able to get pre-build entitlements needed for a tower, it intends to sell 250 Water – as soon as 2022, leaving the fate of an actual build to another developer. The Seaport Coalition – an alliance of several groups that came together in 2019 around plans for yet another inappropriate build in the historic South St Seaport – held a public meeting on Sept. 17, 2020 (via Zoom) to provide an update on key events that have taken place over the course of the covid lockdown, centered around issues that HHC’s plans for 250 Water brought to the fore. The full presentation provided an update on the Brownfield cleanup of the toxic wastes under 250 Water St; issues around air rights; the city required steps that the developer must follow in its attempt to gain approvals for a tower on the site; what the coalition has been doing to protect the seaport from inappropriate development; and how the public can help. 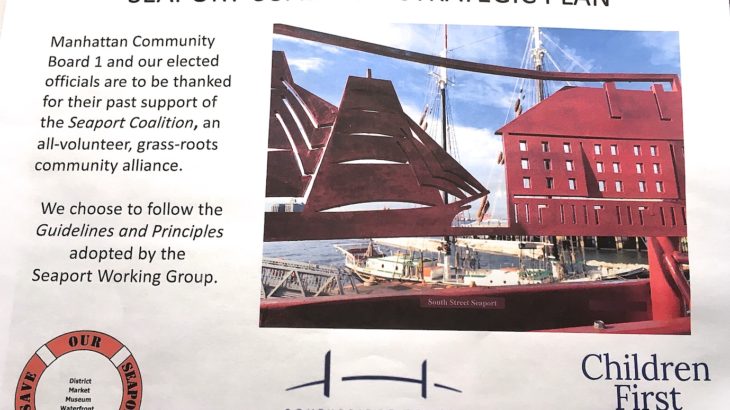