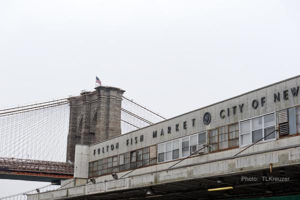 The New Market Building opened in 1939 as the last structure to be erected for the Fulton Fish Market. Now New York City’s Economic Development Corp. says that it and its supporting pier have to be torn down.  (Photo and article: Terese Loeb Kreuzer).

Downtown Post NYC, Vol. 5, No. 4, Feb. 25, 2018; Fate of New Market Building and its Seaport Site Pits Economic Development Corp. Against Community and Pols:
“As a glass-enclosed shopping mall and concert venue erected by The Howard Hughes Corporation nears completion on Pier 17 in the South Street Seaport, the fate of a neighboring 79-year-old building on South Street is causing anger, frustration and even anguish among people who care about the historic Seaport. ”